Business expansion is everything.

You know the old saying about “If you’re not growing, you’re dying…” Probably truer in digital business than anything, especially right now. Look at a company like Amazon. They basically didn’t turn a profit for close to 20 years, but remained the darlings of investors and financial experts.

Now they’re considered maybe the most disruptive company of this generation, right? “Alexa is that true?”

And it all roots in business expansion efforts.

Wherever your base money is coming from, someone’s going to want to see growth. You can maybe have four salespeople and two UX guys, but in reality that doesn’t matter. What matters is the growth. That’s what the stakeholders ultimately want to see.

And now we have a new way to think about it.

This is an article on First Round Review about Molly Graham, who’s worked in a number of Silicon Valley companies and helped them scale. One of the more interesting quotes is about halfway through the article:

That’s why her talk is about Legos. The emotions you feel when new people are coming in and taking over pieces of your job — it’s not that different from how a kid feels when they have to share their Legos. There’s a lot of natural anxiety and insecurity that the new person won’t build your Lego tower in the right way, or that they’ll get to take all the fun or important Legos, or that if they take over the part of the Lego tower you were building, then there won’t be any Legos left for you. But at a scaling company, giving away responsibility — giving away the part of the Lego tower you started building — is the only way to move on to building bigger and better things.

The quote above is from an internal perspective. Like, as you scale, new people will come in. So at one point the marketing team was four people; eventually it will be 14. Those 10 new people represent potential collaborators, yes. But they can also be scary. Maybe they will get better projects or get advanced sooner, or whatever the case may be. The original four marketers might get defensive.

Remember: AI isn’t at scale yet and work is still very psychological because it’s made up of people.

But now shift this to an external perspective. We sell sales outsourcing and go-to-market services, so we’re constantly working with internal, (often) founding teams at companies. The Legos analogy is in play there too. If someone who started a SaaS company was in a sales background, he/she might want to build up the sales team internally — because that’s what they understand. Eventually they realize it’s hard to do that successfully (especially in a new market), so they bring in an outsourcing partner.

Well usually the relationship is solid, and that’s great. But in the early stages, this Legos idea above comes into play. What are we doing? What are they doing? Is there conflict? Are the ideas not aligned? Will they adopt to our overall philosophy?

The whole notion of “work” is often about figuring out that kind of stuff. 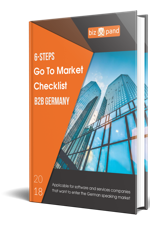 The bottom line on business expansion

We all know the three most important concepts for a business to scale are typically:

Almost every company has “growth” or “expansion” as a goal. That means there will be new people coming in, new external partners, and new ideas. Can you give away the toys you had when your team was smaller? Can you play nice?